Daniel Pinchbeck has written a book “Breaking Open the Head”, an account of his efforts to achieve spiritual enlightenment through psychedelic drug-taking encounters with shamans.

Daniel clearly knows a lot about drugs, but less about spirituality, which is a shame, as I wish he could have told us more about one particular meeting, in Ecuador, with shaman Don Esteban.

He had been a shaman in his youth, but when the missionaries arrived he assumed that Christianity had greater power. He abandoned his traditional spiritual culture and became a Christian, working with the missionaries. They told him not to take ayahuasca [drug], so he didn’t. But as time went on, he realized that, as a Christian, he was no longer able to heal anybody. A nephew of his died, and he knew that with ayahuasca he would have been able to heal him. He decided that Christianity didn’t have all the answers and he returned, after a thirty-year hiatus, to ayahuasca. 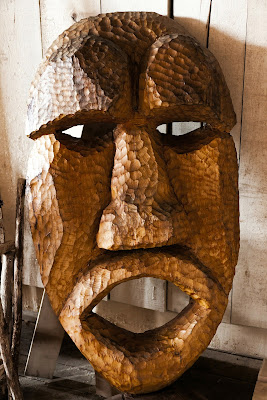 I personally doubt that Don Esteban “assumed” that Christianity had greater power. Rather, he knew.

My wife is Korean, and before our marriage several times consulted a shaman about her future. According to her, the shamans say they cannot do their work if a devout Christian is present, as Christians possess a spiritual power much greater than their own.

When she was 24, and wanting to find a Westerner to marry, my wife consulted a shaman. He told her that when she was 27 she would marry someone from America or Japan. This was a shock, as she had no desire for a Japanese husband.

And then, after she had turned 27, I arrived on the scene, from Japan, where I was living. We were married two months later.

In 1992, shortly before we moved from Japan to Australia, she was back in Korea, visiting her family, and she went again to the shaman, to ask about our future. She didn’t tell me about this visit, as she knew I was extremely antagonistic to fortune tellers and the like.

“Your husband is going to turn to the cross,” the shaman told her. “Don’t ever come to me again.”

Shortly after we moved to Australia, I became a Christian. My wife never told me about the shaman’s message until some years later, and she never really pushed me into becoming a Christian. It wasn’t a self-fulfilling prophecy.

Is there a connection between shamans and Christianity? Does God perhaps use shamans to build a relationship with those of His people who have yet to hear of Jesus? I wonder if Christians should perhaps recognize the good sometimes done by shamans.